The Amrod Brothers are 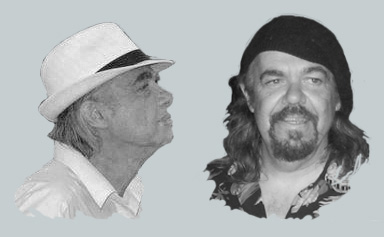 started playing music together in 1960, Paul was 9 yrs old, Willi was 8 yrs old.

in 1969 were signed to Sire Records by Seymour Stein, label president. Other Stein signings to Sire Records include: The Ramones, The B-52's, The Talking Heads, The Pretenders & Madonna.

in 1970 after meeting NRBQ the year before, started playing shows with them and on occasion still do.

In 1971 released their 1st album on B.T./RCA Records . (Live on the Playground by Amrod's Brand).

In 1972 performed Paul's original music with drummer Gary Burke (Bob Dylan, Joe Jackson, The Mamas & The Papas, Shania Twain) in NYC. Gary Burke now produces records including The Amrod Brothers' Children of the Earth (1992) & most recently Everywhere is Out of Town (2012).

In 1990 got together with The JB Horns (Pee Wee Ellis, Fred Wesley & Maceo Parker) & recorded their masterpiece, critically acclaimed  "Children of the Earth" produced by Gary Burke who also did the drumming. The record was originally scheduled for release on Virgin Records but the label was sold & the record was never released in the U.S.

in 1992 Children of the Earth was released in Europe  by the French label 13 Biz.

in 2012 released an album entitled 'Everywhere is Out of Town" by the Amrod Band with  Fred Wesley on the Awesome Mother label produced by Gary Burke.

in 2014 released an album entitled "Cause of You" by Frank Gadler & the Amrod Band on the Awesome Mother label.

in 2016 were commissioned to write the "Rock Opera Diggerman" with Pee Wee Ellis & Fred Wesley based on the music of the Children of the Earth.